As you have probably understood from our tweets and article in French we have reached Porto Santo the northernmost island of the Madeira Archipelago. It is a lovely island with a fantastic golden sand beach (not common on volcanic island) where one can moor safely and a very good well sheltered marina. A quiet and relaxing place to stay. Some tourists (mostly British and Portugese) but not the sun seeking crowd you might find in some other places and no big hotel or resort is visible. It is small and almost secluded, yet it has all the commodities needed. The island is very dry at this season and the scarce vegetation is mostly yellow brown. Being from volcanic origin the landscape is quite impressive with steep cliffs and black peaks.

The crossing from Cascais was one of the most relaxing ever. Single tack at 120 to 140° from the wind mostly under spinnaker. Wind never exceed 14 knots and the sea was really flat. The third day was very light wind (around 6 knots) but we kept moving at 3 – 4 knots. It could have been an uneventfull crossing but we had actually some interesting encounters:

We arrived Porto Santo at 16:00 on the fourth day, which means that we did the 485 miles at an average of 6.3 knots which isn’t too bad considering that we spent about 15 hours at less than 4 knots.

We really love being at sea, sailing the two of us with no land or boat in sight . We’ll see if we feel the same after a 20 days crossing but these 500 miles were perfect. No maneuvring (except for hoisting the spinnaker and taking it down twice) good sleeping (in shifts), lots of reading for both of us and excellent meals properly cooked 3 times a day. This was really cool. 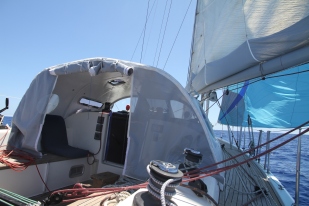 Arriving here also felt very different from previous stops. All the port we called before including Cascais were very familiar, some like Cedeira or Camariñas we visited at least twelve or fifteen times. But from now on, we are discovering new places, ports where we have never been, waters that se have never sailed.But there is something else that we start to realize and which is making this time special: we don’t have to think about coming back. We are not on our four weeks traditional summer leave. We are here, farther than we ever been (on a sailing boat from a French port) and we are free to go further as far and as long as we want. That sounds like freedom and it feels bloody good!

We spent two days in Porto Santo. We did the usual chores, grocery sopping and boat preventive maintenance (this time update of computers operating system and software – neglected before leaving France and oilig/greasing steering system and pilot.). Then, we went for a long walk around the south eastern peninsula on a path along the cliffs to enjoy the breath taking view on the archipelago. We had our dinner in a small local retaurant ou our way back to the port. 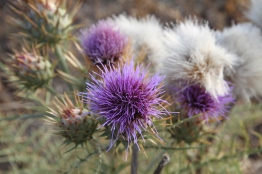 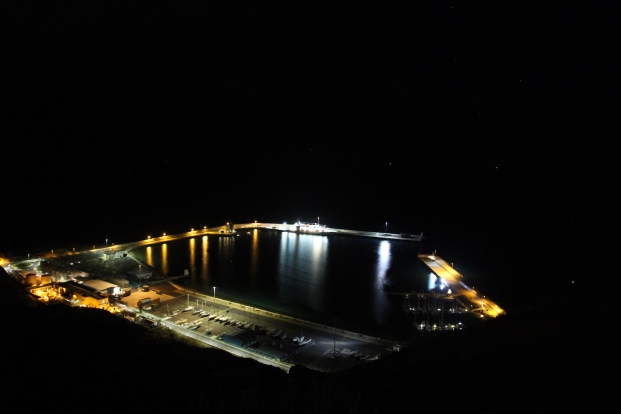 Next day we moved to Madeira proper (Madeira is both the name of the archipelago and its main island. 25 miles under light spinnaker in 8 knots north wind. We droped the anchor at Bahia d’Abra, one of the very few safe mooring on the island. Its a grogeous place, well protected by the surrounding steep red lava cliffs, 10 m deep with nice sand bottom. Swimming and relaxing, peace full night with the boat rolling gently (just enough to sleep like a baby :)) Then today some kayaking around the bay to see the cliffs from right beneath and finally moving a mile away to Quinta do Lorde marina where we hope to be able to do our departure clearence tomorrow.

PS: as expected as we leave the busy European coasts, our AIS signal is not forwarded anymore by coastal stations or commercial vessels and we are not visible anymore on Marine Traffic. To remedy that I will be tweeting our GPS position from time to time so you can still follow (tweet feed is on the right column of the Article page of our blog). This will show as a link to an Iridium.com page. When you click it you’ll get to a google type of map with a dot showing our location. However the map opens at maximum zoom and in the middle of the ocean there is nothing to show therefore you’ll have to zoom out until you see some coast to figure out our location:). My apologies for the inconvenience. I’ll try to come up with something more user friendly later 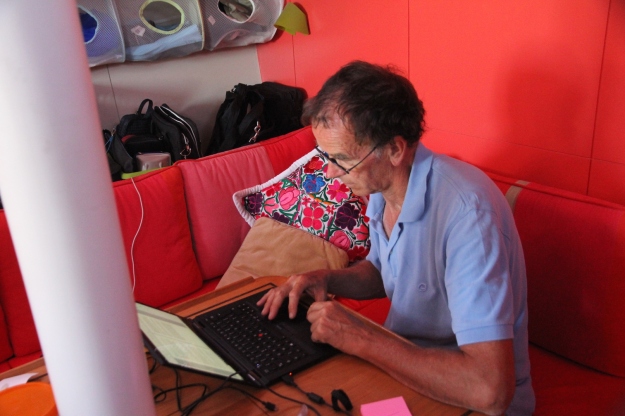